The Brown Barrel & Blind Harry’s: Back to Midway’s historic roots. 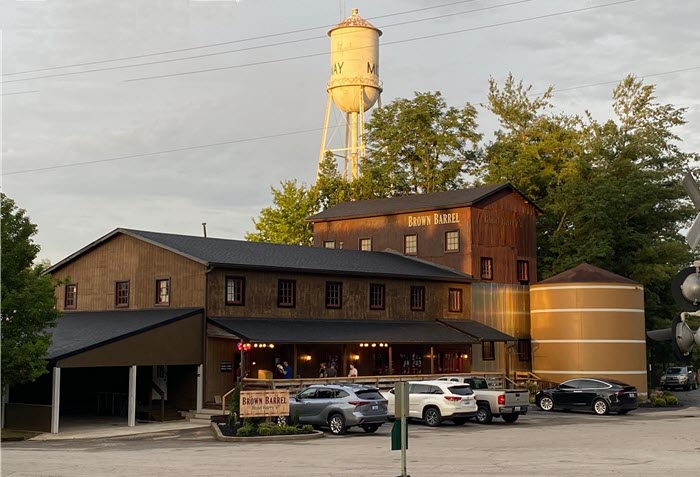 The name “The Brown Barrel” was chosen in honor of beloved grandfather Winston Eugene Peace. He worked as a cooper making barrels for Bluegrass Cooperage, a division of Brown Forman, for more than 25 years.

Winston loved to sing, especially to his children and grandchildren sitting on his knees, and “Little Brown Jug” was one of his favorites. Hence, the Brown Barrel was born.

For people not familiar with Midway, it is only fitting the name is deeply connected to the roots of the bourbon industry, which has been a way of life for hundreds of years. beginning in 1865, bourbon was produced and distilled legally just a few yards from our current location. That site, at 224 N. Gratz Street, was our original location. The distillery operated under several business names: Buford, Guthrie & Co. 1865-67; A. Buford Distillery 1867-68; Keller Distillery 1868-89; SJ. Greenbaum Distillery 1890-1911; Belle of Anderson Distillery 1912-14; and Midway Distilling Co. 1915-24. The location was destroyed by fire in 1924 and remained closed until 1933 when it was rebuilt and began operating as the Woodford County Distilling Company 1933-40; Park & Tilford Distillery 1941-53; and finally as Schenley Products Distillery until 1959.

We moved to our current, larger location in 2022, mostly because of our success. When the opportunity presented itself to move into a larger site that was closer to downtown Midway, we jumped on it. Renovations and upgrades were completed in just a matter of weeks. We now feature more interior space, more parking, three outdoor dining areas rather than one, and we’ll soon have private rooms for parties, rehearsal dinners and other private events. The move has been a total success!

Blind Harry’s takes its name from Harry Clay Anderson, an incredible man special to Midway and the surrounding area. On December 5,1938, he said, “There’s always a way if you try.” This quote takes on unique meaning, as Harry was blind. He accomplished the seemingly impossible when he built two houses that are still standing, and occupied, today; one was completed with no assistance. Blind Harry did the carpentry work, made concrete steps, and even built the chimney.

Midway has always been, and continues to be, a wonderful blend of residents, travelers from around the state and country, and tourists hailing from all over the world. By offering fine dining, fast casual options, grab-n-go food, and a retail business, all in one location, The Brown Barrel and Blind Harry’s offers something for everyone, reminiscent of Midway itself.